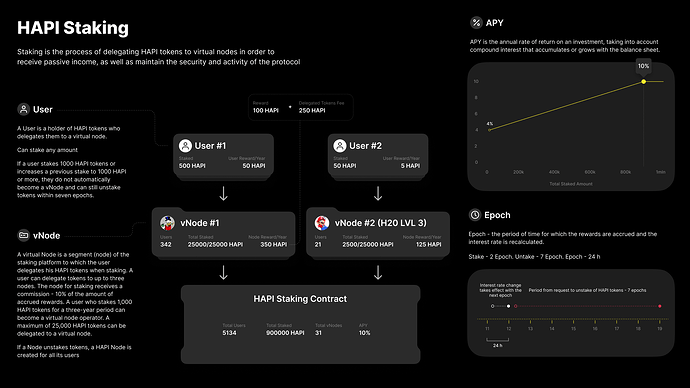 Users can contribute any number of HAPI tokens to the Staking Contract.

The accrual of awards is carried out according to a schedule measured by special periods of time called epochs.

One epoch has a duration of 24 hours. The activation of staking and the accrual of rewards begins two epochs after staking tokens. An ordinary user can request an unstake of their HAPI tokens, the unstake period is 7 epochs.

Users can unstake any number of HAPI tokens. Stake rewards are credited to the balance of the internal account, while there is no “auto-compound” function. Received rewards are not automatically staked on virtual nodes, but the user can manually reinvest the rewards. One user has the right to delegate HAPI tokens to no more than three virtual nodes.

In the event that an ordinary user stakes 1000 HAPI tokens or replenishes a previously staked stake up to 1000 HAPI or more, he does not automatically become a virtual node operator and can still unstake tokens within seven epochs.

Objective of the topic:

Decide and discuss whether this type of staking is acceptable.

i think it’s a great plan for the long term, I definitely agree

Love the proposal, a few questions:

Suggestion;
Team HAPI, I have an idea for the vnodes; that node owners have option to wrap the node into an NFT or something similar so the owner can decide to sell the whole node after e.g a year if he wants. The new owner takes over the nvode and the stakers are uninterrupted it’s and business as usual for them. This way the price isn’t impacted and it gives people more flexibility. It could all be done by smart contract.

I’m very much in favor of a vNode marketplace. One thing to think about though is that if there will be an expiry date that applies to all vNodes, demand for vNodes over time will decrease. We then should have an incentive in place for whoever owns the node on the day vNodes cease to exist. And all nodes should be setup to start with. First by users and then on the marketplace if not all spots are taken.

Suggestion;
In order to avoid long term problems we could limit the vNode acquisition time, making it around 6 or 9 months, after that date, no more vNodes can be created. This will also generate FOMO.

What problems am I talking about? Well, not sure at all but could be the case.
If someone created a vNode in two years, let’s say in 2025, because of the smart contract, this user needs to have an active vNode for 3 years from that day. Stacking won’t last forever, we don’t know final numbers until people start stacking.

The majority will trickle from the Hai farming recesses. Initially, to support the funding, some of the tokens may be bought from the market

The duration, for now at least, is not set in stone

Vnodes should be distributed to whomever is willing to bid the highest price for it.
Instead of setting 40 nodes limit it to 20 nodes with an auction to purchase with HAPI then sellable after a year or two within HAPI marketplace